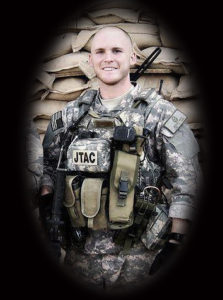 Senior Airman Bradley Randall Smith was born on September 11th, 1985 in Little Rock, Arkansas, and was raised in Troy, IL. A graduate of Triad High School, he was a member of the football team and an active member in his youth group at Bethel Baptist Church.

Brad met his wife Tiffany while in basic training and they married in Feb. 2008 in Monterey, Ca. Their daughter Chloe was born in October of 2009. Brad was able to be at her birth and spend time with his daughter before he left for Afghanistan. He was so excited to have a baby daughter.

On January 3, 2010, while on a dismounted area reconnaissance patrol in the vicinity of Badvan village, his 13-man platoon-sized element was attacked by indirect mortar fire and an improvised explosive device. The initial attack threw an Airman and a Soldier into an adjacent creek, critically wounding the Airman and mortally wounding the Soldier. A second Soldier was mortally wounded and thrown 200 meters across the village by the blast. Airman Smith, without regard to his own safety, immediately rushed from his covered position, and into the waist-high water of the creek to save his fellow Airman and recover the killed Soldier. After moving the victims of the improvised explosive device attack to the Casualty Collection Point, Airman Smith volunteered to retrieve the soldier thrown across the village. Determined to never leave a comrade behind, Airman Smith proceeded at extreme risk, and without regard to his personal safety, along the eastern edge of the village to the Soldier’s remains. Airman Smith retrieved the fallen Soldier and began maneuvering back through the village toward the extraction site. Airman Smith waded back through the waist-high creek and proceeded toward the Casualty Collection Point. Upon arrival, a second Improvised Explosive Device detonated, killing Airman Smith and the platoon medic instantly.